Come Saturday of my last weekend in Montana, it was still damn hot. Real hot. Couple that with the unprofitable outing at Yellowstone Downs the day before, and a few other excuses, no one really wanted to go out to the Crow Fair for the racing but me. Weenies. But go I did, and as long as I was heading out that way, determined to go the extra mile and visit the Little Big Horn Battlefield, which I hadn't seen in quite some time. And literally, it's about an extra mile.

Looking to the west at the Little Bighorn Valley, where the Sioux and Cheyenne were camped. The black gravestone marks Custer, but supposedly he was actually found just behind where I'm standing. 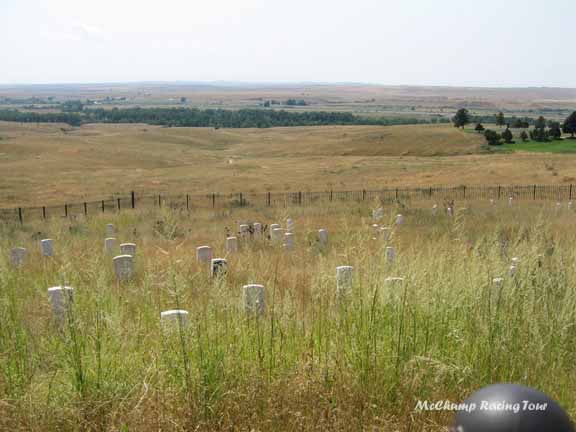 The standard rodeo meet horseback flag ceremony, starting as is usual for the Crow Fair, well past the nominal 2:00 pm post time. Those trees you can see up on the ridgeline, that's the Custer battlefield monument area, and the national cemetery. The tan and red building to the right is the obligatory casino. 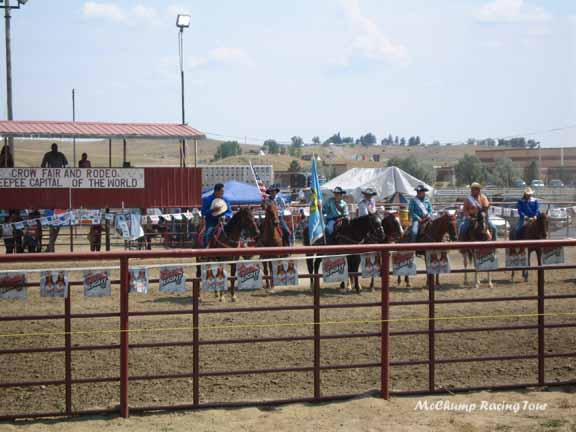 This year they changed things up, and put rodeo events in between the scheduled four races on the day. It made things drag on even longer than usual, and it wasn't getting any cooler.

Spare no expenses paddock. What was unusual on this day was anti-scratches in the first race. That's right, when the race changes were announced, there were more horses running in the first than were in the program. Didn't really matter that much, as the program had nothing but horse name, number, and connections' names. It made handicapping an adventure. 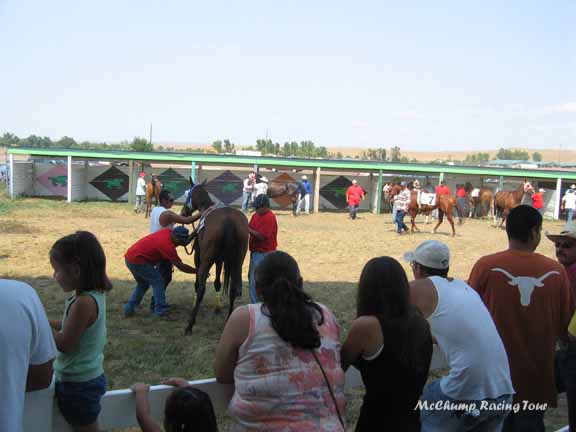 Parading to the post in the rodeo arena, and fans hiding in what shade was available. 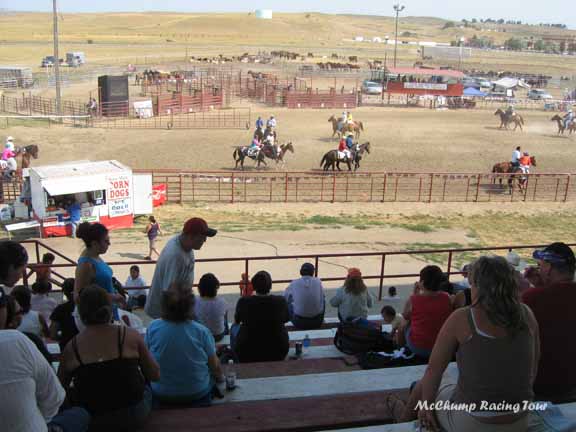 Winners in the circle. 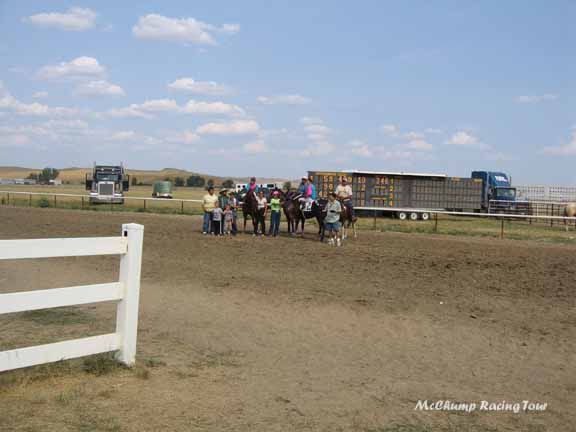 But it was hot, and dragging, and it looked like four races was going to take all damn afternoon long, and I'm not that big a rodeo fan. Plus of course, no beer sold at the Crow Fair. So I didn't stay the whole card. Good thing I left when I did, too. I was about 1/3 of the way back to Billings when a monster wind, rain, and lightning storm hit, moving fast and headed toward Crow Agency. I'd top a hill and the poor chumpmobile would almost be lifted off the road by the wind. Nasty, but I managed to stay dry. Couldn't help but wonder how the poor fairgoers were making out. At least it cooled things down in SE Montana, briefly.

One more day in Billings, and one more day fishing the Yellowstone, and the Stillwater. My little camera got such a workout this summer that the lens cover got clogged up with grahdoo and wouldn't open all the way. Still caught the moment. 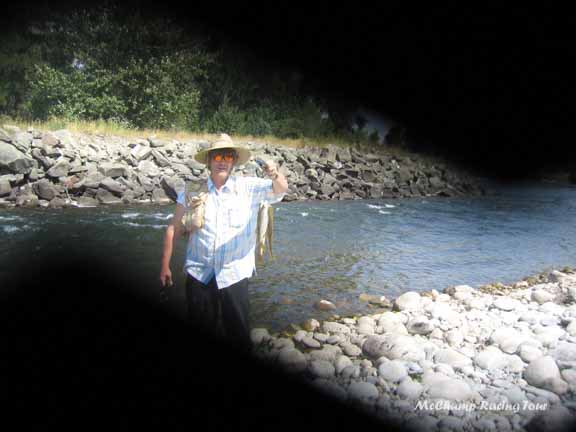 Goodbye, Billings, for this year. snurfle.

The Tour wasn't quite done with Montana, yet, however. There is supposedly an interesting petrified forest as part of the Gallatin National Forest, just off the Yellowstone River valley where it runs north out of Yellowstone Park. I thought it might be fun to go there, via the Beartooth Pass on the Montana/Wyoming border, and then through Yellowstone. This little road runs straight up the side of a mountain, and deposits you firmly on top of the cold, windy world. It's awesome. 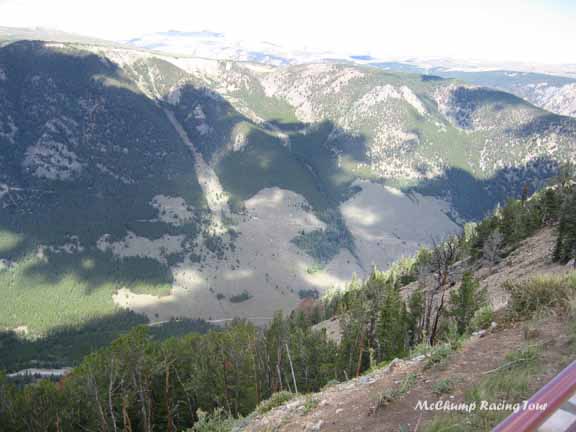 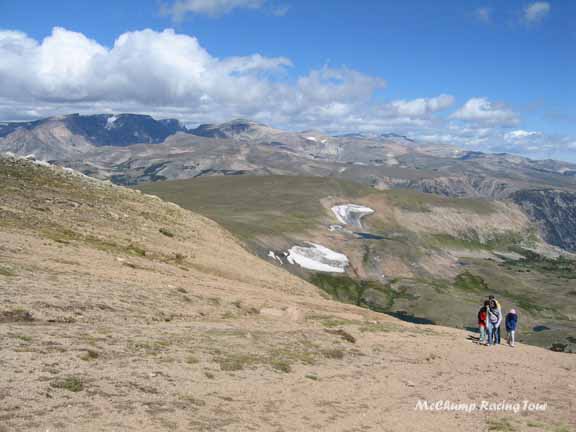 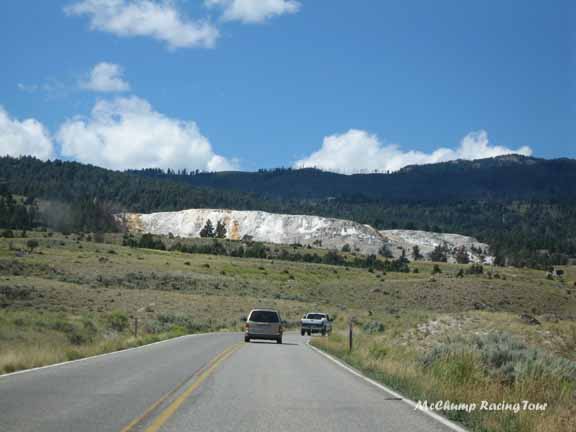 Tragically, the petrified forest proper wasn't encountered this trip. Two little gravel roads lead into the mountains from the little town of Miner, and the one the U.S. forest service chose to advertise as having a petrified forest nature trail didn't really get one to the forest proper. A few petrified stumps sticking out of stone was about all there was to see. Stupid forest service. Next time, I take the road that I thought I should have been on in the first place, but not today, no time. Stupid forest service.