As the sun set, more or less, behind the clouds, on the Mudders and Turfers' last day of racing in England, the realization and anticipation set in that tomorrow we'd finally be off for the ultimate destination of the tour: Paris, France, a fer real furrin' country with a furrin' language and everthang, and Longchamp and the Prix de l'Arc de Triomphe. First, however, the Back of the Bus Gang had one final task to accomplish, so Beer, good English Beer, and plenty of it, was in order for the last evening in London, and several favorite establishments in the vicinity of the St. James Court Hotel were visited to say goodbye, including finally the hotel bar itself, a beacon of civility in Westminster night life, mainly because it is one of the few places that keeps serving after 10:30 pm. Thanks for a good time, London!

Surprisingly, the Back of the Bus Gang was packed up and ready to go at assembly time Friday morning in fairly good order, waiting while the rest of the Mudders and Turfers straggled down and checked out and got their luggage out to the bus in a scene of semi-organized mayhem. Finally though, just 15 minutes late, the bus pulled out for Waterloo Station. There another semi-organized scene of mayhem ensued, as the bus driver deposited us in an alley some distance away from the door, and there was a porter's strike or some such going in the train station help ranks, so the Mudders and Turfers had to (gasp!) carry and push all their own luggage up the little hill from the alley to the main door, and then up the ramp to the train platform into the mob waiting for the platform doors to open, and there was much wailing and gnashing of teeth in regard to this forced manual labor. All's well that ends well, though, and about 15 minutes later, the entire group was comfortably seated in 1st class on the Eurostar, as the train began a rather pokey trip toward the southern coast of England, interrupted not more than just a few times by malfunctioning signals and electrical power loss and such that brought the train to a complete stop several times and put us well behind schedule but luckily we started early in the day.

The most noticeable part about crossing the English Channel through the tunnel is that it apparently puts one out of cell-phone range. The pouty French girl across the aisle whose phone had been chirping its hideous chirp about every five minutes looked miffed and vexed for the duration, and even poutier than before, if that was possible, until the train emerged on the French side (after an unscheduled stop under the English Channel that stressed a few of our group, while others just continued to pound the brandy they had brought along), and the phone chirped to life again no more than two minutes into the light of day. One could not help but feel compassion for the tremendous ordeal she had just endured. The compassion was sorely tested as the phone continued to chirp, loudly, every five minutes, all the way to Paris.

Disappointingly, the north of France looks strikingly like northern Illinois. One could save considerably on the cost of foreign travel by simply driving out past Elgin and pretending the highway signs referred to French locales. De Kalb, France. Somewhat offsetting this disappointment was the fact that the Eurostar really whipped along, passing cars and trucks on an uncrowded freeway like they were simply standing still, giving one a sense of truly flying, eight feet off the ground. Plus there were snappy little menus for the eminently forgettable 1st class meal that occupied a portion of the time. Had it not been for a couple more power outage delays, the train might have arrived in Paris in no time. That not being the case, it arrived in Paris well behind schedule just like an American Amtrak train, like a couple of hours at least, sometime in the early evening hours.

No one at the train station seemed the least bit interested in seeing the passports of the Mudders and Turfers. This seemed to be of great concern to Harvey Pack, who inquired loudly "Hey! Doesn't anyone want to see my passport?", and when that failed, tried to get the attention of the French authorities by pointing to Stuart and yelling, "Hey! He's a murderer! A terrorist!" The French authorities, such as they were, paid no attention to Harvey, as they were too busy standing around doing nothing in a shuffling little group surrounding one of the Mudders and Turfers who had consumed just a bit too much brandy aboard the train and had proceeded to walk smack into a glass divider wall that had been cleverly disguised as a glass divider wall, breaking his spectacles in the process and putting a nasty gash in his forehead above his right eye that was bleeding profusely all over France as he lay on the train station floor writhing in pain. Meanwhile his friend and travelling companion was attending to the injury while waiting for an ambulance, leaving his luggage unguarded, which somehow resulted in a briefcase with return tickets to the US making a mysterious disappearance. Add to that the fact that another of the party had left a suitcase aboard the train, apparently thinking someone else had packed it on a luggage cart, which prompted Lee Tomlinson to scurry back to recover it, only to discover it making a clandestine exit from the station aboard the luggage cart of a French woman who right up till a few minutes previous had not been its owner. Those Mudders and Turfers who had managed to make it safely to the sanctuary of the Horse Racing Abroad bus at the curb through the gang of French cutthroats and thieves prowling the train station platform could not help but laugh, hysterically, at the scene of total mayhem playing out in front of them. In Mark Twain's words, we were on a pleasure tour, and this was pleasuring with a vengeance.

Some unspecified time later, those Mudders and Turfers who were not continuing their tour via ambulance were deposited safely in the courtyard of the Meridien l'Etoile hotel, joining the great host of English people who had come over with Horse Racing Abroad on its annual trip for Arc weekend. Some of the Back of the Bus Gang, on Mark Cramer's suggestion, headed for the Left Bank to find some more reasonable cafes than the ones in the immediate neighborhood, and perhaps some adventure, but after the long London night and the more than adequate adventure of the Eurostar trip, your reporter simply opted for an early night to bed.

Saturday in France had been an "optional" day on the tour, the options being travel out to Chantilly in the morning and then Longchamp in the afternoon, or don't. The largest part of the Back of the Bus Gang opted for maximum horse racing, and signed up for the Chantilly excursion, along a with a number of the great host of English people who had come over with Horse Racing Abroad on its annual trip for Arc weekend, and thus it came to pass that two buses full of pilgrims set out early on Saturday morning for Chantilly. Luckily, the bus with the Mudders and Turfers got to the Chantilly training center first, and got to eat up almost all the food and drink all the juice at the included continental breakfast at the apprentices' mess hall before the other bus arrived. Some took a bit slow to slurping coffee out of a cereal bowl, but pretty soon everyone was doing it and having a great old time. Oddly, the apprentices' mess hall was decorated with large framed photos of jockeys and horses taking horrendous falls.

Following breakfast, the bus went down the road apiece and disgorged us all at an entrance to "the gallops", where everyone was invited to don little plastic booties that looked like something out of a surgical room. Those of us who had read the tour brochure in advance had noted that "old shoes" were advised for this particular portion of the tour, had actually brought same along, and disdained the foofoo plastic booties. The "old shoes" were soaking wet, and cold, within about 10 steps out into the long grass of the gallops. 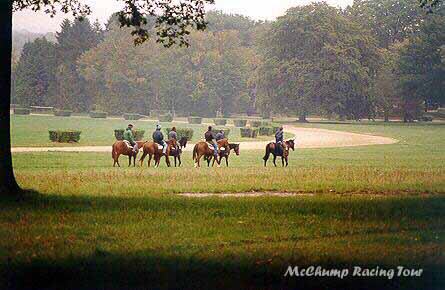 The gallops, at first glance, appeared to consist primarily of a very large open field in a beautiful forest, with a dirt track surrounding it, but we knew it to be much larger, as the tour guide had been pointing out trails all through the Chantilly Forest on the way in. Indeed, a map of the complex there at the entrance point revealed miles and miles and miles of trails in the woods surrounding us. As we started venturing out into the field, a set of horses started appearing out of the mist far to our left and then passed by our position, horse after horse after horse, like 40 of them, and the French exercise boys bid us all good morning, and smiled and joked amongst themsleves. Joked about our booties, no doubt.

A long trek through the wet grass up a small hill ensued, to a point near the edge of the woods and some trails. There it became obvious that there were horses exercising back there in the woods, as we could hear the hooves pounding and the boys chattering, and catch a glimpse of horses and riders galloping through breaks in the forest, and occasionally a pair of horses would fly by us on the trail we were nearest, so everyone would have to jump back from their rubbernecking.

After awhile of this, the group was instructed to go back down the hill a bit toward a small open space, and there was trainer Criquette Head waiting to talk with us, as her set of horses finished their gallops and slowly emerged from the trees to circle in front of us in the open space, hotwalking.

After a long and friendly chat by the hot walks, during which Ms. Head was very gracious and entertaining and more than willing to call several riders up by us to talk about and show us the particular horses, we headed off for Ms. Head's yard while the horses slowly walked back into the mist.

Like John Gosden's yard in England, Ms. Head's yard at Chantilly was like nothing on an American backside, being instead several beautiful, enclosed courtyards of ancient and "quaint" architecture, with stalls on all sides, small houses at either end, and beautiful landscaping. Ms. Head once again gave freely of her time to answer myriad questions, and laughed and joked and explained her training philosophy, including the interesting practice of feeding her horses avacados.

Quite a morning in an absolutely beautiful training environment for horses that ended all too soon. Thanks very much to Ms. Head for her time, and to Horse Racing Abroad for making it happen. Definitely a highlight of the trip.

On the way out we prevailed on the bus driver to stop at the Chantilly Chateau, off the backstretch of Chantilly Racecourse. Now this is a little murky, but if memory serves, the former owner of the Chateau was the one who spent all the money to establish the Chantilly training center and the track there. Based on the looks of the Chateau, he musta had the bucks. So we stopped, and we oohed and aahed, and then reclaimed our seats at the back of the bus.

And the Back of the Bus Gang was off to the day-before-the-Arc races.