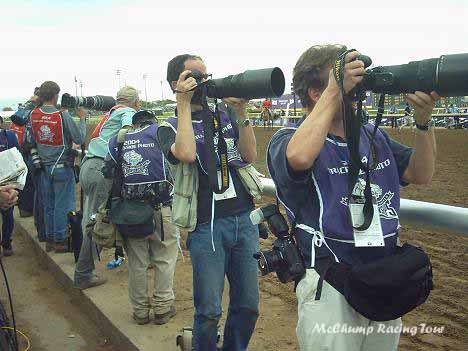 The photographers get an early start on blocking our $200 view.
This is a post parade. Some race. I'm not sure which. I couldn't see any of them.

I've been attending Breeders' Cups for a number of years now. Always in "fan" seats, from absolutely awful ones at Arlington, to fairly decent ones at Churchill, and everything in between. But I never had any "insider" seats ... you know, the ones not available to the general public, the ones they save for the bigshots who actually breed horses and nominate them to the Breeders' Cup, and stuff like that.

So just imagine my delight when my breeding partnership was offered tickets directly by the Breeders' Cup folks, seein' as how we'd spent the money to nominate a horse we'd bred to the BC and all. Gosh dang it! Finally, I would get some good seats at a Breeders' Cup! "Apron Box", it said. And only a mere $200 each, which mind you was $75 more per seat than I'd ever spent before for a BC seat but still ... insider seats!

Man, I was excited. Good seats! We'd be able to see everything up close and personal! And I had four, to share with my friends (including McChump #2, driving in from wherever). Naturally several months of meticulous planning and so on ensued, for plane tickets, and hotels, and all those other little added expenses that go along with attending an out-of-town event.

Well, the excitement was a little bit muted when I arrived at Lone Star on the Thursday before the BC and found these were located on the "east apron", meaning down past the finish line. Plus they were right on track level - no elevation at all. And most of the track was blocked by the toteboard. But still, they'd be good tickets for portions of the race, right at trackside and all.

Or so I thought, right up till race time on BC Day.

For you see, on race day, all the accredited photographers on hand, or at least a good portion of them, decided they needed to take up stations right in front of our seats and stand there all day with their butts in our face. Not crouched down under the rail. No. Not even standing down in the little gutter by the rail. Too low for gods such as them. But smack on top of the little curb on the inside of the rail, which put them at a slightly higher level than us back on the apron, with their butts right in our faces. Which of course meant when there was anything to see on the track, the paying folks in the front row had to stand up to try and see around the photograpers' butts, which put their butts in the faces of the 2nd row folks, and so on, buttwise, back to our 3rd and 4th rows. Combine that with our "up the stretch" view to begin with and you can imagine: We couldn't see a thing. Except butts, backs, and heads. 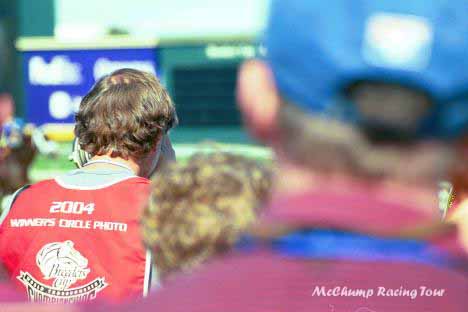 My $200 tiptoe view of nearly every single BC race. Nice, ain't it?

But that isn't really fair. Sometimes the $200 view was really clear and you could actually see part of the track. For instance, this one ... God we jumped for joy when we could see this much.

Now then, why all this happened is curious, and seemingly inexcusable.

Supposedly BC accredited photographers sign something saying they won't stand up and block the view from paying seats, and that rule has been enforced at other BC venues like Gulfstream and Churchill Downs. There is even a person by the name of Keith Kleine who works for the BC and is in charge of doing the accrediting and enforcing. But for some reason the enforcing wasn't done at Lone Star, and our whole section (of about 270 $200 seats) was blocked by these clowns standing up there to take photos. This day was a miserable failure for Mr. Kleine and Breeders' Cup customer service in general.

These ended up being the worst BC seats I have ever had while being the most expensive. If the BC folks knew ahead of time that the photographers were going to be blocking the view of these seats they sold to their breeders, selling them for $200 was a crime. Major League Baseball charges less for World Series tickets for the season ticket holders. If they just screwed up and didn't enforce the rules they should just be ashamed. Hell, with the photographers up there blocking the view, these seats would have been overpriced at $15 as walkup standing-room G.A. spots sold to town drunk Louie Pheeters from "Gunsmoke".

Except the "free" sammich bar was good, so that was probably worth $5 to someone. I hope as many people as possible who snuck into the grandstand from other sections partook of that sammich bar, so that the $800 I wasted on these crummy seats would have at least had some value to some fans.

Anyhow, D.G. Van Clief and Breeders' Cup (and possibly Lone Star): Ha ha. This year you pulled off a really good scam. You screwed me and my friends and everyone else who sat down there rail-side out of $200 for a totally worthless ticket, not to mention wasting the time and money to travel to Texas. (Though of course, the people you stuck behind the little shed housing the jockey scale were screwed even worse than me.)

But guess what, slicks - No more. That was my last in-person BC, ever. It was also the last one I'll bet a cent on, and even in this one I quit betting after the Distaff, I was so disgusted.

So BC Ltd., screw you if you're going to boink your $200 paying small-time breeder ticket holders in order to max out your profits, hosing those paying customers and breeders so that every Tom, Dick, & Harry magazine and newspaper in the world can have their own photographer stand there all day blocking the view to get one or two pictures that they'll print when all is said and done. As a long time paying customer I ain't coming back.

And I would suggest for the sake of future ticket holders that you review your photographer policies, and then actually enforce them.

My friend and sometimes past co-BC-traveller the VP KSFC put it in perspective when all was said and done, and got home I told him I was never going back. "What I don't understand is two hundred dollars for a God-dang horse race!", says he. And he's right. What was I even thinking in the first place?

Right now I am so thankful to D.G. Van Clief and the BC folks that they made these seats available to me for only $200 so as not to have to sit at home and watch on TV.
Really I am.

I'm not sure if the following email was a result of my Internet ranting or the personal letter I sent to D.G. Van Clief. One thing I am sure of is there is absolutely nothing about the issue of photographers' butts.

"Thank you for your comments regarding your experience at this year’s Breeders’ Cup World Thoroughbred Championships at Lone Star Park at Grand Prairie on Saturday, October 30. Your input is valuable to us and we appreciate you taking the time to express your concerns.

Nevertheless, we realize that there were certain locations and times throughout the day when the level of customer service fell below satisfactory standards. The reasons for this are at least in part attributable to the weather (more than three inches of rain fell in Grand Prairie in the days leading up the Breeders’ Cup) and in part due to the fact that it is extremely challenging to ensure an adequate level of uninterrupted service to a crowd of more than 53,000, including some 39,000 fans seated in temporary facilities.

Please don’t mistake our explanation as an excuse. Superior customer service is something we strive for at the Breeders’ Cup and a hallmark of Lone Star Park throughout its seven years of operation. We’re disappointed that your visit to the Breeders’ Cup at Lone Star Park was not more enjoyable, and we hope that you will accept our sincere apology.

If you care to send me your address, we would be pleased to send you a small token of our appreciation for your attendance and patience on what we hope you would agree was a historic day of world class racing.

I didn't send them my address in response to the email, but they somehow got it anyhow, and sent me the same letter in hard copy along with a big fat coffee table book about the Breeders' Cup written by Jay Privman and current up to 1999 or 2000. It has lots of pictures. Maybe in a few years there'll be a new edition, and instead of looking at a book with old pictures I'll be able to look at a book that includes the Lone Star BC I could not see from almost railside. Maybe even with pictures taken from my very position at the track by the very photographers who blocked my view. Not sure I can endure the wait.

There are no comments posted here yet